What's Next For Ahtanum Valley Elementary 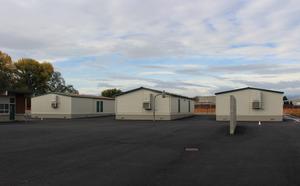 Ahtanum Valley was last expanded in 1993.

COVID-19 isn’t the only challenge facing Ahtanum Elementary. West Valley is seeing considerable growth. Several new and planned developments suggest District enrollment will increase substantially over the next few years. The growth and age of Apple Valley and Summitview elementary schools were factors in the bond to replace those schools. The new schools will increase capacity at the elementary level, making it possible to move the fifth grade back to the elementary schools with K-4th grades, alleviating some of the pressure at the mid-level campus. While the District is considering new boundaries to help redistribute a number of students to the schools with increased capacity, it’s anticipated all of the schools will still see increased enrollment with 5th grade returning—including Ahtanum. This past summer Ahtanum received three portable classrooms from elsewhere in the District to help accommodate the projected growth in their enrollment. While the District is currently developing a long-range facilities master plan that will identify a schedule for expanding or replacing West Valley Schools, Ahtanum was last expanded in 1993, and it could be several years before additional bond funding is available for expanding Ahtanum further. In the interim, the portables will help accommodate the 5th grade as well as allow for increased capacity for years to come.